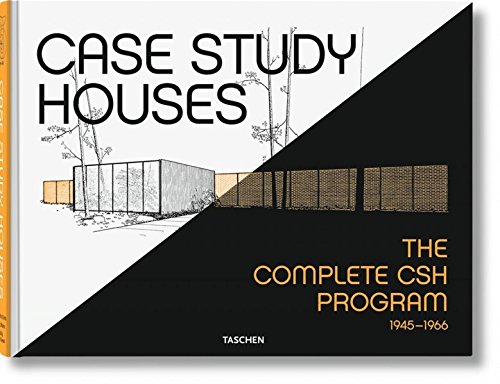 The Case Study House program (1945-66) was an exceptional, innovative event in the history of American architecture and remains to this day unique. This title brings you a monumental retrospective of the program with comprehensive documentation, photographs from the period, and contemporary photos, as well as floor plans and sketches.


The photographer:
A resident of Los Angeles since 1920, Julius Shulman documented modernist architecture in Southern California and across the globe for nearly eight decades. His images of Pierre Koenig's Case Study House No. 22 (1960) in Los Angeles and Richard J. Neutra's Kaufmann House (1947) in Palm Springs are among the most recognizable and iconic architectural photographs of the 20th century. Shulman's interest in photography developed into a career when he photographed Neutra's Kun Residence in Los Angeles with his Kodak Vestpocket camera in 1936. Neutra admired young Shulman's images and continued to commission his work. Other leading architects of the time followed suit, as did hundreds of magazines, newspapers, and book publishers. Shulman's numerous awards include the Architectural Photography Medal from the American Institute of Architects (1969), a lifetime achievement award from the International Center of Photography in New York (1998), and honorary doctorates from various academic institutions. He died on July 15, 2009 at the age of 98.


The author:
Elizabeth A. T. Smith is the former Chief Curator and Deputy Director for programs at the Museum of Contemporary Art in Chicago. Previously a curator at MOCA Los Angeles, where she organized "Blueprints for Modern Living: History and Legacy of the Case Study Houses," Smith has taught at the University of Southern California and the School of the Art Institute in Chicago. She has curated numerous exhibitions and published widely on various aspects of contemporary art and architecture.


The editor:
Peter Gössel runs an agency for museum and exhibition design. For TASCHEN he published monographs on Julius Shulman, R.M. Schindler, John Lautner and Richard Neutra as well as several titles in the Basic Architecture Series.